Can Genealogy Research Be Painful?

You bet. Last night I went with my husband and his sister to an exhibit at the FDR Library and Museum in Hyde Park, New York. It was a wonderful exhibit (see the virtual tour), and we were treated to a guided tour by the curator and a docent who were very knowledgeable.
But the subject was an extremely painful part of my husband's family history: the shameful incarceration of all west-coast Japanese and American citizens of Japanese descent during World War II.
Before I met my husband I visited a similar exhibit at the Smithsonian in Washington, D.C. At that time I didn't know any Japanese Americans personally, but I was moved to tears by the images of American citizens being forced out of their homes, losing their businesses and possessions, their farms and houses, and sent to the middle of nowhere indefinitely under armed guard. 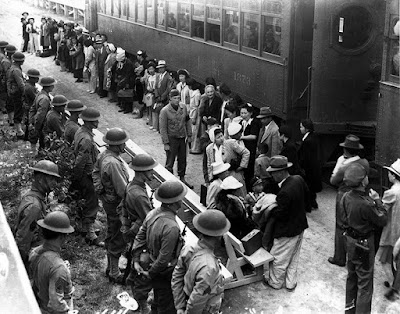 Last night, seeing images of the very camp where my in-laws were kept and where my husband's great grandfather died made me cry and made me sick to my stomach. But this is an enormous part of my husband's family history and worth preserving. The experience certainly shaped my late father-in-law's character, and that was not lost on his children.
I may spend countless hours gathering names and expanding my tree, but an exhibit like this provides so much insight into the character and experience of our ancestors. It is priceless.
Posted by DiAnn Iamarino Ohama at 6:36 PM No comments:

When You Can't Agree to Disagree

When working on your family tree, there will be times when you have conflicting information about someone. I had two documented birth dates for my grandfather.


When you know they can't both be true, which one do you believe? 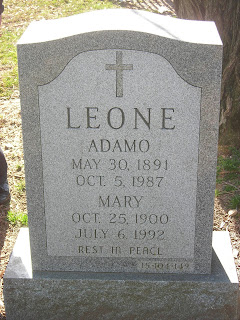 I follow a couple of rules here. Rule #1: The earliest recorded date is probably correct. When I'm dealing with very old documents from the old country (in my case, Italy), I know that my rural ancestors had lives nothing like our own, and it was entirely possible to lose track of your own age. Imagine that!


So if I'm comparing birth records from the 1800s for several siblings, and the parents' ages never match up, I put more faith in whichever number was recorded the earliest.


You're more likely to know your birth year when you're 20, and your widow is less likely to remember it when you die at a ripe old age.

Getting back to my grandfather, the family always believed his birth date to be May 30, 1891, and that's what we put on his tombstone. But after he passed away I found his World War II draft registration card, and he must have said his birth date was May 28, 1894. I don't see how someone could misunderstand if he spoke aloud—even in his heavy accent—May the thirtieth, 1891.


Once I found this draft registration card, I was left with the task of hopefully finding his birth record someday. Thankfully, someday came along recently, and I have my proof. Rule #2: Some documents are more official than others.

Don't believe every bit of information you find. You need to weigh the value of one document versus another. My grandfather's birth record clearly overrules his World War II registration card. It actually follows both rules because it was recorded much earlier, and it is an official, certified document.
Posted by DiAnn Iamarino Ohama at 4:12 PM No comments:

Are you overlooking one of the biggest free genealogy resources of all? If you're new to genealogy, or you've been doing it long enough to know there's more to learn, you'll be amazed at all the lessons you can learn on YouTube.


For starters, there's a seemingly endless amount of genealogy videos produced by Ancestry.com for free. Simply go to YouTube and subscribe to the Ancestry channel.


You'll find groups of videos including Ancestry's Desktop Education Series, featuring titles such as "Ways To Clean Up Your Family Tree", "Documenting the Enslaved in Your Family Tree", and "What Does That Say? More Paleography Tips & Tricks" designed to help you decipher difficult old-style handwriting.

Use the search tool to find videos on a subject of particular interest to you, such as census forms. Or search for the very likeable and extremely helpful Crista Cowan, an expert genealogist who's lucky enough to work for ancestry.com.


There is a very good chance you'll find a valuable free video on any subject that's important to your genealogical research. Be warned: These fabulous videos will show you how much you're missing by not subscribing to ancestry.com, but so do shows like "Who Do You Think You Are?" and "Long Lost Family". I'm not trying to sell you on anything, but if ancestry.com wants to hire me, and I can work from home in New York, I'm in!


But Ancestry's videos are just the tip of the iceberg. Search the site for "genealogy" or a more specific phrase, like "civil war pensions," and start watching. When you find a video provider whose work you enjoy, like Crista Cowan, subscribe to their channel. Subscribing to a channel simply means you'll be offered their videos first, and you'll have a convenient way to return for more.


There's nothing like a show-and-tell to teach you how to use a resource or point out exactly what you can find on a particular type of record. Watching a genealogy video may become your favorite way to start the day.
Posted by DiAnn Iamarino Ohama at 12:28 PM No comments:
Newer Posts Older Posts Home
Subscribe to: Posts (Atom)