Mapping Your Ancestors Can Answer Questions

My parents grew up in a tight-knit neighborhood in the Bronx, New York. They went to grade school together, and it was a very small class of neighborhood kids. They had relatives nearby, either in their apartment buildings or on their blocks.


Family gatherings were held at the house where my mother was born until the time when our relatives no longer lived there or owned it. I have childhood memories of the neighborhood, but they're a bit vague now, and my mom's building was eventually torn down.


That's why I like to use "Street View" on either Google or Bing maps and feel like I'm driving through the neighborhood. I can use it to go right up to the door of the church where I was baptized, which is a couple of doors up from where my mom was born. 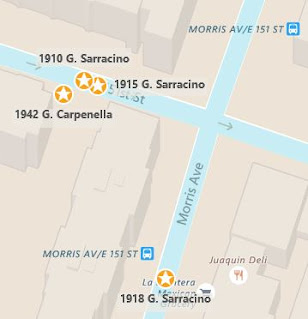 But you can do more with Bing and Google maps, like creating collections of addresses and plotting them on the map.


Based on all of my collected information—census forms, draft registration cards, city directories, death certificates—I plotted a handful of my closest relatives' addresses in the Bronx from 1900 to 1940. There were some outlying locations over the years (meaning a few blocks away), but the various families tended to cluster together again and again.


He and my great grandmother Maria Rosa came to America in July 1899 to join Maria Rosa's father Antonio (my first ancestor to come to America) in the Bronx. In 1900 and 1905, Giovanni and Maria Rosa did not live in the neighborhood where my parents later grew up. They were quite a few blocks away by St. Ann's Avenue.


That St. Ann's address is associated with Ebling's Brewery. Ebling was a famous brewery operating in the Bronx in those days, and William H. Ebling, Jr., was the vice-president of the Westchester Brewing Company in Mount Vernon, which borders the Bronx.


Going back to my collected documents, my great grandfather was a bartender in 1905, worked in a saloon in 1910, but after that he was a painter in buildings. 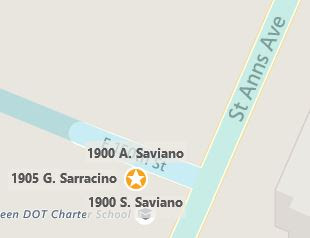 Now I know that he lived right by Ebling Brewery in the earlier years. He may have formed a business relationship with Ebling, because newspaper clippings I discovered showed that he sold a building to the Westchester County Brewing Company of Mount Vernon, New York for $2,500 in late 1912.


In 1921 he either bought or sold his former residence of 603 Morris Avenue (the abbreviations in the clipping make it difficult to understand), and he is listed in the transaction as "Ebling Brewing Co., agt [agent] Giovanni Sarracino et al."


Was my great grandfather flipping houses back in the day? Or was he buying or selling the building on behalf of Ebling for a piece of the sale?


In 2009 at a St. Ann's Avenue construction site, tunnels were unearthed and discovered to be the "Natural Caves" where Ebling aged their beer a century before, and they stretched quite a long distance.


Until I can find out more, I'd like to think Giovanni was selling the earth beneath his building for $3,000 in 1921 to age that crisp Bronx-water beer.
Posted by DiAnn Iamarino Ohama at 9:04 PM