How Much Can Your Learn from Your Relative's Obituary?

A well-written obituary can tell you so much about a relative's descendants.


I am in awe of professional genealogists like Megan Smolenyak. She finds the living descendants of long-lost military servicemen so their remains can be returned to the family.


Living descendants are hard to find! Let's say you're looking at a family in the 1940 U.S. Census with lots of little children. Unless the boys' names are very unusual, how can you be sure where they are today? And what about the girls? How can you find them if they married? What are their names now? 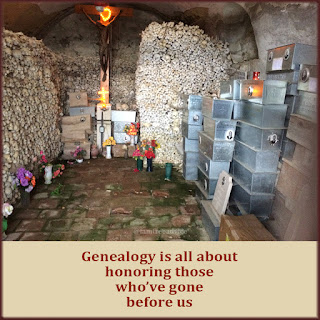 The only tool I have—one that can be incredibly helpful—is a long, detailed obituary.


Do you know how many names and facts you can learn from a well-written obituary?


Imagine the deceased is your mother's third cousin. You don't know what became of her, who she married or who her kids are. Let's take a closer look at everything there is to learn from a detailed obituary.


The following is a real obituary. I've changed every single name and place to protect the family's identities. The obituary text is in black and my notes are in reddish brown.


Let's examine this obituary and put together a family tree based on the facts presented.
Joan G. Ericson Logan passed away on December 13, 2018 at the age of 96. [Ericson is her maiden name; Logan is her married name.] She was the oldest of seven children born to the late Howard B. and Grace Ann Ericson on April 15, 1922 in Jefferson City, MO. [That's a packed sentence! We have Joan's birth date and place, her parents' names, but not her mother's maiden name, and the facts that she has 6 younger siblings. We know her father is dead, but it doesn't specifically say her mother is dead, although that may be what was meant.]


Joan graduated from Jefferson City High School. She received her B.S. degree in Education from Logan State College. Then attained further studies at Indiana University, majoring in school librarianship. [We now have the names of 3 schools where Joan may be found in yearbooks, school newspapers, or other records.] Joan's teaching career, which included English, band, choir and elementary school librarian, spanned over 33 years in the State of Missouri. After retiring from the Logan Public School System, she went on to become a 9-year volunteer in the Ashcroft College Library System where she received the Volunteer of the Year Award in 2003. [We know where she was working, geographically. As a volunteer, we may expect to find her in several local newspaper articles. There was almost certainly a 2003 newspaper article about her being named Volunteer of the Year.]


Subsequently, Joan met and married Mr. James Emery Logan, Sr. while students at Logan State College. To this union [See what I mean? This time it does say they were married.], one son was born James, Jr. He married Angela Marie Thompson and to this union 4 children were born. [Here's another marriage announcement to look for.]


Joan was a lifelong member of the United Methodist Church in Jefferson City. She served as the church pianist, organist, coordinator of the annual Christmas and Easter presentations. She was especially proud when James, Jr. was ordained as a United Methodist Elder. [Between Joan's extraordinary involvement and her son being an elder, this church definitely has information to offer about this family. Church newsletters and other publications could be very helpful to telling this family's history.]


Joan was preceded in death by her siblings, Henry, Howard, Andrew and Anthony Ericson. [We've already learned that these siblings were younger than Joan, but we now know we can look for their death records.] She leaves behind to cherish her memory two siblings Anna Elena Worthington [Anna Elena may be widowed or divorced since she has a different last name, but no husband's name is given.] and William (Irene) Ericson [William is Joan's brother and Irene is his wife. While it seems odd, this is how it's done. The spouse who is not the blood relative is mentioned in parenthesis.]; a son, James Emery Logan, Jr. (Elaine), grandchildren: Fred Nelson [the Nelson grandchildren should belong to Joan's first son Anthony Mark Nelson, Jr. and his wife Darlene Stanton.], Edgar (Maryann) Nelson and Victoria Nelson, James Emery Logan, III (Colleen), Valerie T. Simpson (Tyler) [Valerie was a Logan, and this tells us she married Tyler Simpson.], Christian F. Logan (Elizabeth) and Jacklyn Logan, 12 great grandchildren, 1 great great grandchild and a host of nieces and nephews.
That was a LOT of information. We can build a family tree from this information, plugging in the facts we have. We'll make some guesses for birth years. My rule of thumb is to estimate that a husband and wife are about the same age, they had their first child at age 25, and the children were born 3 years apart. An estimation like this will put your people's ages in the right ballpark. Your research will be a little easier when you have a rough idea of their ages.


Now, with a basic tree, we can search for all these names and find hard facts.

If Joan were your distant cousin, how happy would you be right now?


When the day comes that you're asked to write an obituary for a loved one, like your parent, how many genealogy clues will you include for future generations to discover? Don't skimp on the details.


Maybe it's time to let your immediate family know what you'd like your obituary to say.

And speaking of clues:

Posted by DiAnn Iamarino Ohama at 6:17 AM