How to Be a Family Tree Myth Buster

I've been building a robust family tree for my son's girlfriend since August. She lost her father in late July, and my son told her, "I'll bet my mom can build your tree for you."

It's been easy because her family has been in one corner of Pennsylvania for centuries. To someone like me, whose first immigrant ancestor set foot in America in 1892, that's amazing.

At first I struggled with how big I wanted to make this family tree. There's so much documentation, and each couple seems to have had ten children. To get this done, I shifted my focus to her direct line. I especially wanted to identify the country of origin for each immigrant ancestor.

She doesn't know what (as in, what nationality) her last name is. I can't imagine not knowing. I discovered her last name was originally French—possibly with a different spelling. Plus she has Austrian, Irish, and English ancestors.

I've generated a few large family trees and descendant reports so far. Then I remembered a memory she shared with me.

Myth #1: This Acclaimed Artist is My Relative

As a student, she visited a local museum and saw a painting by a man with her last name. She pointed to it and said, "That's my family." The tour guide or teacher gave her a look that seemed to say, "Sure, kid. Whatever you say." But her mother had told her that this famous artist was her relative.

I set out to discover the artist's relationship to her family. Wikipedia told me who his parents were, and Ancestry helped my find the rest. Now I can prove this artist is her 2nd cousin 5 times removed. Interestingly, his death certificate says he poisoned himself due to "melancholia."

As I worked to place the artist in the family tree, I saw that his parents were not yet in there. But this Quaker family left behind many records. The artist's grandfather, who was already in the family tree, had 10 children listed on a church record. The 9th child was the father of the artist.

Does your family have its own myths about notable relatives?

Myth #2: The Captain of the Titanic is My Relative

My sons' paternal grandfather told us his great uncle was Captain Edward Smith of the Titanic. As a great nephew, he became a member of a Titanic historical society. His mother Lillian felt ashamed that her father's brother was the captain.

Years later, when I caught the genealogy bug, I decided to document my sons' famous ancestor. Immediately I hit a dead end. Not a brick wall. A dead end that made the captain's relationship to my sons impossible.

The captain had no brothers. He had a half-sister and a daughter. The captain was born in Staffordshire, England. He married in Lancashire, and lived with his wife and child in Hampshire.

Meanwhile, the Smith family in my tree is very incomplete. I haven't found Lillian's father Walter Smith's town of origin in England. (To keep things straight, Lillian is my sons' great grandmother who said she was the captain's niece.) But Walter married a woman with a long history in Derbyshire.

I'm not familiar with all the shires in England, so I turned to a map. The captain's place of birth (Staffordshire) is a one-hour drive from Lillian's mother's place of birth (Derbyshire). (One hour on today's modern roads.) I'm going to ignore Captain Smith's professional time in:

I wondered if Walter Smith was Captain Edward Smith's 1st cousin, since he had no brothers. To prove that, I need to trace Walter Smith further back to see if he ever lived in Staffordshire. It won't matter that their name is Smith, will it?

I know Walter Smith sailed to America in 1891 from the northern port of Liverpool in Lancashire. I know he returned to England because he married his wife Elizabeth Merrin in Derbyshire in 1896. I hoped to find his U.S. arrival in 1897 with his wife.

Derbyshire records have helped me a lot with Elizabeth Merrin's family already. Now I see a marriage record for Walter Smith and Elizabeth Merrin. It seems they lived at the same street address in Derbyshire when they married.

Of course I went straight to Google Maps with the address. I wondered if it was a big apartment building. Nope. It's a store with an apartment or two above it. Maybe their families were close (literally).

Looking at the suggested records for Walter Smith on Ancestry, I found an 1871 census. His age and the name of his father are a match, but I need many more documents to prove this is Walter. Right now it seems as if he was born and raised in Derbyshire.

My working conclusion: There's no reason to think Walter Smith from Derbyshire is a close relative of Captain Smith from Staffordshire. 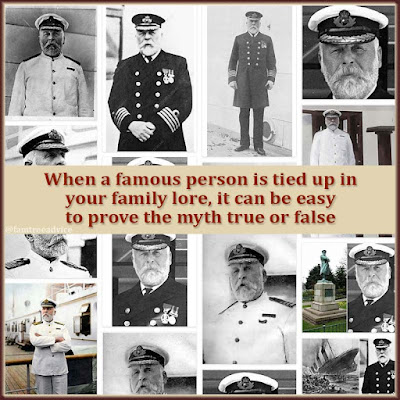 When trying to prove or disprove some bit of family lore, be sure to investigate both sides. Gather as many documents as possible on family members. And research the famous person who somehow worked their way into your family's story.

Posted by DiAnn Iamarino Ohama at 6:00 AM