How to Read an Italian Birth Record

I spent about five years viewing microfilm of every birth, marriage and death record from my maternal grandfather's hometown in Italy. Gathering every piece of information allowed me to build his very extended family tree back about seven generations. Spoiler alert: 90% of the town was interrelated!
It also taught me a lot about how to quickly decipher these documents. Let me show you how.
The other day I found online documents from my paternal grandfather's hometown in Italy, and I quickly found the 1902 birth record for my grandfather himself—Pietro Iamarino.
Here is that birth record with some annotations. (On 5 Feb 2017 I have updated this image to point out the time and day of birth.) 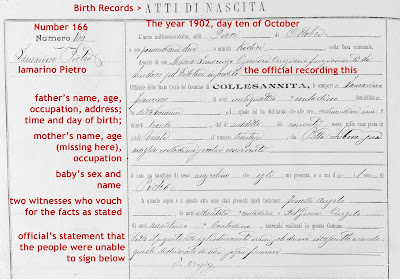 Different towns will use a different form, and that form will change over the years, but there are a lot of similarities. They generally begin with the year, day, month, hour and minute of birth. The year is always written out—never in numbers. So 1902 is millenovecentodue. The next section is an official statement to the effect of "Before me, official's name and title in this town, appeared this man (father of the baby's name, age, occupation, and address), to state that a baby was born to him and his lawful wife (her name, age and occupation)." The baby's name is out in the column of the document, but also below the mother's name.
The next section includes the names, ages and occupations of two people from the town who swear that this man (the father of the baby) is who he says he is, and that they attest to these facts. After this you may see signatures of the father, the witnesses, and the town official. Often in these old documents the father and the witnesses may be illiterate and unable to sign. If that is the case, the official will state as much.
So this document tells me that my grandfather Pietro was born on 10 Oct 1902 in Colle Sannita at 1:30 p.m. to Francesco Iamarino, a 24-year-old farmer, and his wife Libera Pilla. It also says he was born at 36 via Casale, which I'm trying to reconcile with the facts I had previously. I stood on the spot where my grandfather's house once stood, and it was not via Casale, nor can I find a via Casale in modern Colle Sannita. But his father Francesco Iamarino's birth record also includes that address.
Once you become used to the form from the town you are researching, you'll be surprised how quickly you can extract all of the facts you need. To learn the key Italian words from these vital records, see my other blog entry, "Italian Words You Must Know."
Posted by DiAnn Iamarino Ohama at 5:02 PM