What To Do When You Have No Birth or Death Record

I've made it clear in my welcome message that I never trust someone else's family tree if they don't show their sources and I can't reproduce their facts. So even if I'm given facts by someone I trust, I will still do my due diligence and search for factual proof.
A good resource to use when you don't have access to someone's birth or death record is the Find A Grave website. If you're lucky, you may get to see an image of the headstone with full birth and death dates. A genealogist's giddy dream!
Here's an example of a situation where I wanted to verify the birth and death dates I'd been given for one relative, but you can also try this not when you're trying to prove someone else's work, but when you're trying to fill in missing dates.
I knew from census records that this man lived in Cleveland, Ohio and was alive in 1940. So I used the search form in Find A Grave to find an Edward Byrne who was born after 1855 and died after 1940 in Cleveland. 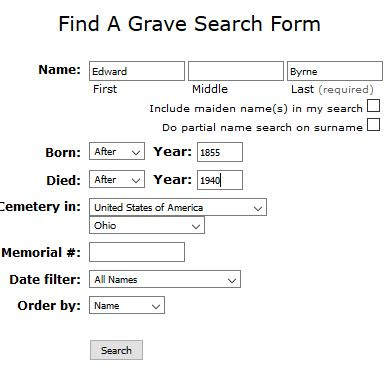 The search yielded five Edward Byrnes, but as my yellow highlighting shows, only two are buried in Cleveland. Focusing on those two, I see one was born in 1863 and died in 1941—that fits. The other, as it happens, is the son of the man I'm looking for. 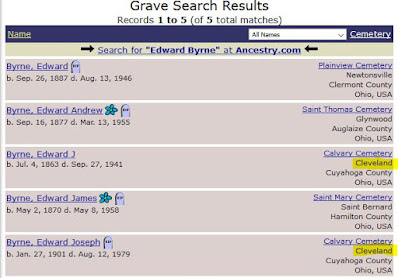 When I click his name, I am not given an image of his headstone, but there are several facts recorded by someone I do not know. Once again, it's up to me to determine how many of these facts are trustworthy. But there is truly an abundance of facts, and I'm grateful for that.
I know from the census forms I've collected that he was a grocer. That fits. I know his street address in 1940. That fits. I have the names of many of his relatives, and I see them listed here. Short of seeing his birth and death certificates myself, this looks like credible data. And based on this information, I could attempt to purchase a copy of either his birth or death record from the state of Ohio.
Remember, the more resources you use to corroborate the facts about someone in your tree, the stronger your tree will be.
Posted by DiAnn Iamarino Ohama at 6:39 PM