Why Did They Come to America?

When I first started researching my Italian ancestors after spending my honeymoon in Italy, I couldn't understand how they left such a beautiful place to come and work for the railroad or live in a cramped city apartment.


My entire family came from rural Southern Italy where poverty was extreme and advancement was all but impossible. In the late 1800s it became difficult to grow crops, and waves of cholera and other diseases were increasing the death rate. America offered steady work for healthy men.


On a PBS website called Destination America, you can view an interactive map that shows the amount of emigration throughout Europe by decade, from 1851 to 1910. According to this fascinating map, the decades are characterized as follows: 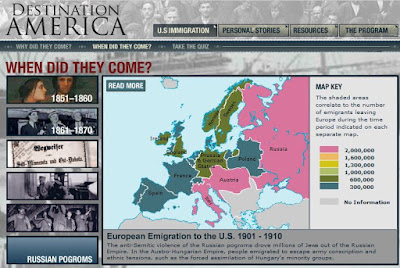 With so many millions of people pouring into the United States, some controls were needed. According to an immigration timeline on a Harvard University website, more than three million immigrants came to America between 1891 and 1900, and that includes many of my ancestors. A whopping 5.7 million Italians came to America between 1911 and 1920, including my two grandfathers.


The overwhelming numbers of immigrants led to a series of laws that were intended to stem the flow a bit. In 1917, according to the Harvard website, Congress enacted a literacy requirement for immigrants by overriding President Woodrow Wilson's veto. The law requires immigrants to be able to read 40 words in some language and bans immigration from Asia, except for Japan and the Philippines.


Between 1921 and 1930 more than four million immigrants arrived, but several laws during this decade enforced immigration restrictions:


I have cousins who left Italy in the 1950s but simply were not allowed to come to the United States, so they and many of their friends and relatives settled in, and still live in Niagara Falls, Canada. After the 1920s or so, it was never again as simple as getting on a boat, coming to America, and saying you wanted to stay.
Posted by DiAnn Iamarino Ohama at 7:21 PM