How to Read an Italian Death Record 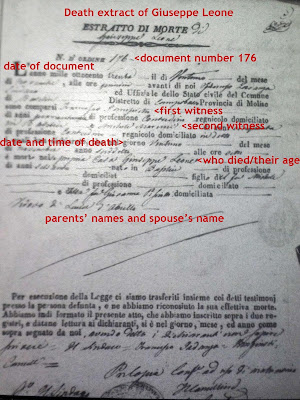 The general format of many such documents from this era is to state the date, the name and position of the official recording the information, describe two witnesses to the facts, state who died and when, and provide the names of the person's parents and spouse. At the bottom is a somewhat generic official statement that everything above is true and here are our signatures to prove it.
Now for more detail. In this particular town the form begins with the words "Death extract" and the decedent's name is handwritten. The documents are numbered in the order in which they are recorded, so this is document 176 for the year.
Next is a long fill-in-the-blanks statement reading (in general): "The year 1830 the day 21 of the month of November at the hour 15 (3 p.m.) before me (Mayor's name) and officials of the state of the Comune of Basélice, District of Campobasso, Province of Molise, appeared …"
Next comes the description of the two witnesses: "Francesco Iampietro, age 49, a farmer who lives in this town, and Michele Marucci, age 50, a farmer who lives in this town, to tell me of the death on the day 21 of the month of November in the same year as written above, of Giuseppe Leone, at his own house, age 60, born in Basélice, whose profession was [missing], who was the son of the late Michele and the late Giovanna Pisciotti, and who was the widow of Lucia d'Abrillo."
That's a lot of information. At the very least you want to key in on the name of the decedent, when they died, their age and place of birth, and their parents' and spouse's names. In this town's records I have often seen "widow the second time", meaning here is the name of his second wife who also died before him. It is particularly helpful that you can tell by the word "fu" or "furono" that the parents have already died. I have seen several birth records for babies in this town whose father died before they were born. The word "fu" tells me this.
Like anything else, with enough practice and a basic knowledge of the key words, you can decipher these documents, too.
Posted by DiAnn Iamarino Ohama at 7:27 PM